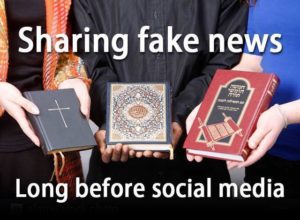 I chanced upon the image above whilst having an idle scroll through my Facebook feed. The post purportedly exposes religious holy books,  and more importantly the gospels as fake news. Though it’s meant to be just a humourous snark at the religious, the idea that religious beliefs have no actual bearing on reality and therefore neither do their sacred texts is a pervasive one. But is it accurate?

Here’s 5 reasons why it’s not:

1. Religious holy books are not all the same

The postulation that ‘all religious texts are fake news’ is built on the presupposition that all religious texts are ostensibly the same. This is categorically wrong. Let start with the three books pictured in the meme; The Bible, The Qu’ran and The Torah. The Torah, the primary holy scripture in Judaism was written by over 25 individual authors over a time span of at least 1000 years and contains 39 books. The 39 books that make up the Torah are written in 6 different literary styles; history/narrative, law, wisdom, poetry, prophecy and apocalyptic.

The Qu’ran, on the other hand is a book of revelation, supposedly recited to Mohammad by the Angel Gabriel and written down verbatim. However, Sahih Bukhari, one of the most sacred collections of Hadith (prophetic traditions) in Islam says that Mohammed would orally dictate portions of this revelation to Muslims without having first written it down. After Mohammad’s death in 632AD Zaid ibn Thabit was given the job of formalising Mohammad’s revelation into a written document by Abu Bakr, Mohammad’s Father in-law. Zaid went to the Muslim community and pieced together the portions they had memorised along with any written fragments to form the Qu’ran. Even after Mohammad’s revelation was canonised in the Qu’ran there was much controversy over whether certain verses that Mohammad supposedly recited had been left out by Zaid. Though we find in the Qu’ran some familiar narratives and characters; Ibrahim (Abraham), Musa (Moses), Dawud (David) and Isa (Jesus), there are some stark differences between the Qu’ranic and the biblical accounts, particularly around the person of Jesus (Isa).

The New Testament contains the canonical gospels, Matthew, Mark, Luke and John, which are biographies covering the key moments of the life, ministry, death and resurrection of Jesus of Nazareth. These books are based on eyewitness accounts or were actually written by eyewitnesses themselves (John). The vast majority of New Testament scholars agree that these four books were written and in circulation within the 1st century AD. The rest of the New Testament is compiled of an historical account of the early church (Acts), letters written by the apostle Paul, Peter, James and John among others and the book of Revelation, an apocalyptic revelation written by John during his exile on the island of Patmos.

‘Again the high priest asked Him, saying to Him, “Are You the Christ, the Son of the Blessed?” Jesus said, “I am. And you will see the Son of Man sitting at the right hand of the Power, and coming with the clouds of heaven’ (portion of scripture taken from Mark 14:61-62)

The Gospel narratives show us that Jesus clearly believed he was the Son of God, his enemies believed him to be making this claim and duly had him crucified for it. The Qu’ran, however explicitly denies the divinity of Jesus:

“Verily, this is the true narrative (about the story of Jesus), and La ilaha illallah (none has the right to be worshipped but Allah, the One and the Only True God, Who has neither a wife nor a son)…” (portion of scripture taken from Surah 3:62 of the Qu’ran)

The Qu’ran also denies that Jesus was actually crucified, claiming that another man resembling him was killed instead (Surah 4:157) which runs directly to both the Gospel accounts and the 1st century historical account of Josephus and the early 2nd century testimony of Tacitus.

‘So what?’ the critic might say, two fake news sources disagree with one another, there’s no need to take either of them seriously, right? Wrong.

The Qu’ran’s claims that Jesus was not the son of God and that he did not die on the cross are made by an appeal to the reader to believe the truth of the Qu’ran as the divine word of Allah. This is circular reasoning; you should believe what the Qu’ran says simply because the Qu’ran says it. This is in contrast to the claims about Jesus found in the New Testament. In 1 Corinthians 15:3-8 we find an early church creed used by the apostle Paul, New Testament scholars (both believing and non-believing) date this creed to within 5 years after the death of Christ. Interestingly the creed lists historical data concerning the death, burial and resurrection of Jesus:

How is this different to the claims of the Qu’ran? Well, the appeal is made to historically verifiable events. Paul mentions that Jesus appeared to more than 500 people all at once and that most of them are still alive. Paul is saying; ‘check it out if you don’t take my word for it! Speak to the other eye-witnesses.’

The critic cannot treat the claims of all holy books as though they are analogous to one another. They are not.

3. The Gospel’s claims make the best sense of the available evidence

The alarmingly popular belief that there is little to no evidence for the person of Jesus of Nazareth is demonstrably false. The historical footprint left by Jesus is remarkably well defined, especially for a figure of antiquity. In fact, the work of philosopher, Dr. William Lane Craig and New Testament Scholar Gary Habermas among others has shown that there are several unanimously accepted facts concerning Jesus that scholars in relevant fields agree upon. Here are the four most compelling ones:

1. After his crucifixion, Jesus of Nazareth was buried in the tomb of Joseph of Arimathea.

2. The Sunday after Jesus’s crucifixion, his tomb was found empty by a group of his women followers.

3. On multiple occasions and under various circumstances, different individuals and groups of people experienced appearances of Jesus alive from the dead.

4. Jesus’s original disciples believed that Jesus was risen from the dead despite their having every predisposition to the contrary.

Given these four facts, the inference with the best explanatory scope and power is that Jesus of Nazareth literally rose from the dead.

‘Well maybe they hallucinated. They wanted Jesus to be alive so badly they hallucinated and believed it to be the risen Jesus.’ This is weak on two counts; 1. These appearances of Jesus didn’t just occur for individuals but for groups of people, even up to 500 people at once. Hallucinations are like dreams, I can’t invite you to share my dream with me in real time, neither can we hallucinate the same exact thing at the same time. 2. If these appearances were merely hallucinations then the tomb ( the location of which was known to Jew, gentile and Christian in the city of Jerusalem) would have still been occupied. All the authorities would have had to do to quash these resurrection stories was produce a corpse. This hypothesis has weak explanatory scope.

To claim that the Gospel narratives are simply fabricated and bare no relation to historical facts is foolish.

Those who are best placed to dismiss libellous accounts of events are those who were there. For example, if you and I witnessed a hit and run; a blue car driven by a white woman in her mid 30’s hits a child and then speeds away. Let’s say I start telling the police it was a black male in a red sports coupe you’re going to say something aren’t you?! If the story of the life, death and resurrection of Jesus of Nazareth were just a myth propagated by Peter, John and the early fathers of Christianity their claims would have been roundly dismissed by their contemporaries. However, we don’t see this, in fact, writings by 1st and 2nd century historians Josephus, Tacitus and Suetonius lend support to the Gospel accounts rather than undermining them. Though the references to Jesus in these texts aren’t especially long or detailed they don’t contradict in any way what we already know of Jesus from the Gospel narratives. This is persuasive evidence that the gospels give an accurate account of actual events in 1st century Judea.

There have to be motivating factors for promulgating fake news. What are they commonly? I would take a stab at money, power and fame. There is so much fake news in circulation today that it has become the responsibility of the reader to fact check almost everything they read! Why is this? Your opinion pays. Fake news is created to shape the opinion of the reader to get them vote a certain way, spend a certain way or believe a certain way. Generally because it will line somebody’s pockets or make someone famous if they do so.

The apostles and others who believed they had encountered the risen Jesus stood to gain nothing but suffering for spreading their news. It ultimately earnt them torture and death. These men weren’t dying for something that they fervently believed by faith like the modern day faith martyr, no, they went to their deaths for refusing to deny what they had seen with their own eyes! There is a difference. Yes, after the Emporer Constantine embraced Christianity as the state religion of the Roman Empire things got a lot easier for the everyday Christian. But before this the ‘good news’ earnt you a date with some hungry wild beasts in a packed arena.

There simply was no other motivation for the spread of the Gospel message other than that these men and women truly believed they had encountered the risen Jesus. The historical data surrounding the life, death and even resurrection of Jesus of Nazareth only lend credence to their claims.

Are the gospels fake news? No. The irony is, this meme duly entered itself into the ‘fake news’ category by virtue of its statement.

The Minimal Facts of the Resurrection – Aaron Brake (http://pleaseconvinceme.com/2013/the-minimal-facts-of-the-resurrection/)

When was the Bible written and who wrote it? – Matt Slick (https://carm.org/when-was-bible-written-and-who-wrote-it)