By Graham Phillips | More hours of scientific research have been done on the shroud than on any other archaeological artefact in the world. In 1978 a crack team of scientists gained access to the shroud and conducted hours of intensive research on it. These scientists tested everything from the composition of the herringbone weave cloth to the nature of the image on the shroud itself. A portion of the shroud was also taken and divided up between laboratories across the world for carbon dating. Critically this portion was later proven by Chemist, Ray Rogers, (a member of the original 1978 team) to have come from a section of the cloth damaged in a fire in the 16th century and repaired with cotton fibres interwoven with the original linen fabric. The results of the 1988 radio-carbon dating tests seemed to indicate that the shroud was not in fact the burial shroud of Jesus but an elaborate forgery dating from between the 13th and 14th centurys. There were also carbon-dating tests conducted in 1982, the results of which were not released to the public, these tests dated the shroud between 30AD and 70AD. Since then, Ray Rogers’ 2005 paper on the 1988 radiocarbon tests along with the work of countless other experts have shown that the widely publicised ’88 tests were flawed.

1. The image on the shroud 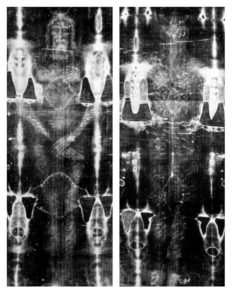 An example of a photo-negative taken of the front and back of the shroud.

A team of scientists gained access to the shroud in 1978 and were able to conclusively prove that the image in the shroud had not been painted on. There was no evidence of brush strokes or dye on the woven cloth, instead they discovered that the image had in fact been ‘scorched’ onto the very top layer of the fabric. The image is superficial; it doesn’t run right through the cloth, but is only a fraction of a human hair deep on either side of the shroud. The image on the front and the back of the shroud are of exactly the same definition, meaning that the image was not an imprint created by the weight of the man. If it were, you would expect the back image to be ‘thicker’ and more defined than the front, with the blood smudged, but that is not what we find on the shroud. When the US Airforce dropped the Atom bombs on Hiroshima and Nagasaki eerie ‘shadow images’ of victims who had been literally vaporised by the blast were left on pavements and walls. The image on the shroud is a far more intricate example of the kind of quasi-photographic shadow images found at Hiroshima and Nagasaki. Current shroud researchers postulate that only a very specific form of light radiation emitting from the corpse of the man in the shroud could have burnt the image into the cloth itself. Put simply, the technology was not available to create an image of this kind in the 14th century. Even with our technology today it would be quite a feat to recreate the sort of image we find on the shroud of Turin.

2. The hands and feet 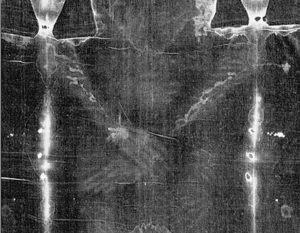 The nail mark through the wrist clearly visible.

The hands and feet have clearly been pierced through. It appears that the feet were placed on top of one another and a nail driven through both and the nails driven through the wrists between the Ulna and Radius. This is widely thought to be the way in which all crucifixions would have been conducted.  A nail driven through the palm instead of the wrist would have easily ripped out due to the weight of the body pulling down on the nails. The blood flow from the hands are also consistent with someone who has been crucified, flowing backwards over the wrist and forearm.  Seeing the photo-negatives of the wounds caused Chief Surgeon Pierre Barbae to say:

“If this is the work of a forger, then the forger would have to have to be a trained anatomist for there is not a single blunder.”

Also, the median nerve in the wrist is pierced, the thumbs automatically fold into the palms and this is exactly what we see in the shroud image.

The negative and positive of the face including blood stains around the crown.

The eyes of the man in the shroud are swollen almost shut due to severe bruising. There is so much blood around the moustache and beard area that many pathologists who have studied the shroud believe that the man received a blow to the face that literally ripped his lip all the way up to his nose. It also appears that clumps of the man’s beard have been ripped out which lines up with the prophetic scripture from Isaiah 50:6;

There are also multiple lacerations around the crown of the man’s head, the blood flow from these wounds is clearly visible on the shroud. This lines up with the gospel accounts of a twisted crown of thorns being forced upon Jesus’ head by the Roman soldiers (John 19:2, Mark 15:17, Matthew 27:29).

The blood highlighted on the shroud. The blood is separate from the image itself.

There are reportedly over 200 independent whipping marks covering the body of the man in the shroud. He has been whipped on every square inch of his body barring his face which had been severely beaten. The instrument used was almost certainly the Roman flagrum, which consists of a handle and three leather strips with lead dumbbell shaped objects at the end of each strip. These whips were designed to gouge the flesh, to rip through flesh and muscle and even lascerate nerves. The whipping marks on the back, legs and chest of the man in the shroud are consistent with the Roman flagrum. These wounds would have caused intense levels of pain and left his body mutilated.

Forensic pathologists have even been able to determine from the wounds that the scourging was carried out by two men and that one of the the men was significantly taller than the other.

5. Wound in the side 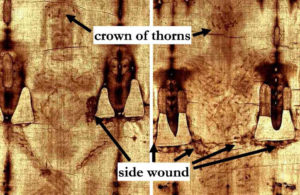 The measurement of the wound in the man’s side measures 1 and 3/4 by 7/16ths of an inch which corresponds to the measurement of the tip of a particular Roman spear. The spear likely entered between the fifth and sixth rib and pierced the pericardium, a walled sac containing the heart, the vessels and fluid surrounding it all. The shroud clearly shows not only blood flowing from the side wound but also a watery serum. This is consistent with the gospel accounts of Jesus’s side being pierced on the cross and blood and water flowing out indicating he was already dead. Forensic pathologists have theorised that this flow indicated that the pericardial sac had been ruptured.

Remarkably, scientists from the 1978 investigation found what they believed to be coins placed over the eyes of the man. Through enhanced images they were able to make out the distinctive markings of the Roman coin; the Lepton. The letters and markings on the coin detected on the eye are consistent with Lepton coins of Pontius Pilate minted between 29AD and 32AD. The coin actually bears a misspelling of Tiberius Caesars name, the same misspelling has been found on numerous other Leptons of Pilate minted around the same time. If the shroud was a forgery, how would the forgers have known what a Lepton of Pilate looked like, let alone accommodated for the spelling mistakes on his Lepton coins minted between 29-32AD?

The blood on the shroud is real and there is a lot of it. Pathologist Pierre Ballon identified the blood type as AB positive, interestingly this is the same type of blood found on the Sudarium of Oviedo (supposedly the cloth wrapped around the head of Jesus mentioned in John 20:7). The man in the shroud bled profusely, particularly around the head and face and from the large wound to his side. According to Dr John Heller and blood specialist Dr. Allen Adler the blood was also found to contain large amounts of the bile pigment, bilirubin which would only be present if the man had been severely and traumatically beaten immediately prior to his death. The blood on the shroud has remained red, why it hasn’t darkened over time by oxidisation is currently unexplained.

Dr Max Frei, a Swiss criminologist who was a world leading expert in dust and pollen analysis postulated that if the shroud was a fourteenth century forgery as the original carbon dating tests seemed to conclude, then only French and Italian pollens should be found in the cloth. However, his exhaustive tests found 58 different pollens on the cloth, only 17 of which were native to Europe, the rest were from Palestine and southern Turkey. Which meant that the shroud had been at these places at some point in its history. In addition, flowers were found on the shroud, 28 of these flowers were found to grow in Jerusalem or within 12 miles of Jerusalem. Frei also found dirt on the foot of the image which when analysed contained a mix of minerals found at the Damascus Gate in Jerusalem and nowhere else.

The legs are raised showing the body is in a state of rigormortis and the slight swelling of the abdomen shows that the cause of death was in fact suffocation. These are also signs that the body of the man had been dead for no longer than 72 hours. This would be consistent with the gospel accounts of Jesus rising from the dead on the third day after his crucifixion.

“Assuming that the shroud were manufactured in the 14th century it would mean that someone would have had to conceive of photography approximately 650 years before it was invented. I don’t think so.” – Barrie Schwortz, Shroud Documenting Photographer

“The shroud image is made from tiny fibres that are 1/10th the width of a human hair. The picture elements are actually randomly distributed like dots in your newspaper photo or magazine photo. To do this, you would need an incredibly accurate atomic laser. This technology does not exist.” – Kevin Moran, Optical Engineer

“The evidence of a scourged man who was crucified and died of suffocation is clear cut. The markings on this body are so clear and so medically accurate that they are in my opinion beyond dispute.” – Dr Robert Bucklin, Forensic Pathologist

“The image on the cloth is made of conjugated, dehydrated cellulose. That means the shroud image appears to be a scorch on a piece of linen. It is possible that what we are seeing here is the resurrection of Jesus.” – Dr. Gary Habermas, Historian

The more the shroud is examined the more remarkable an artefact it reveals itself to be. What is beyond dispute is that the image in the shroud was created by a man who had been beaten, scourged and crucified. That this man then died from suffocation, (the most likely cause of death in Roman crucifixion) and was embalmed in myrrhs and aloes and wrapped in the linen shroud. What then appears to have taken place is peculiar and controversial, after the body had been dead for now longer than between 48 and 72 hours a very specific light wave radiated out from the man’s body and scorched his image onto the burial shroud. It may be possible that this isn’t the burial shroud of Jesus of Nazareth, but if it isn’t then the man in the shroud image died in a manner identical to Jesus according to the gospel accounts. If it were not the shroud of Jesus then why preserve such a macabre object? Whether or not one believes it truly is Jesus’s burial shroud, at the very least it is the closest that any of us will come to a Roman crucifixion and certainly is worthy of being the worlds most studied historical artefact.